we have had to remove details of one of the authors because they have recieved abusive emails. We stand by all our writers/our critical Bis of Colour family.  If you want to support J, a marginal activist, in their work, you can make donations to the bis of colour PayPal. Please mark your donation ‘for J’ so we know to pass it on,

First section by J who says

BiCon is paying bi people of colour to speak at this year’s virtual BiCon.

I don’t recommend anybody work with them – they’ve fucked bi people of colour over in systemic racist ways every year since I’ve known the event (that’s a full fucking decade now). They’ve even managed to fauxpology their statement about fucking up: referring to bi people of colour as “that community” rather than recognising bi people of colour as part of the bi community, and phrasing what has happened previously as the event “not felt welcoming” is just about as useful a statement as “I’m sorry you felt that way” – their actions have not been welcoming, its not about hurting individual feelings.They invited the Home Office agents to have stands at their events, cops in uniform were allowed to attend sessions, one of last year’s organisers went on an antisemitic screed before the event that (despite me making a formal complaint about it) was never handled despite promises from other organisers, and they’ve consistently not handled huge numbers of racist incidents between attendees, and they still allow white people to run sessions that are entirely culturally appropriative.

But I’m not the boss of any of you – if you want to work with them and you’re a person of colour, they’ll pay you. Just know that they’re doing it so they can prove their liberal wokeness, their diversity and that bi people of colour have forgiven them for (at least) the last ten years of racism. They will use you, but if you need to work and they’re an option you can work with then go into it with your eyes open.

“Funding for speakersWe are aware that BiCon has not always felt welcoming to Bisexuals of Colour and would like to take a step towards making things better for the future. We have managed to secure some funding to pay for speakers from that community who would be willing to contribute to the programme. Please contact Sessions20@bicon.org.uk if this would be of interest to you. We understand that many Bisexuals of Colour will not be on our mailing list so if you know anyone who might be interested please let them know.”

some context from Nila K

1. infopoint: it’s now TEN YEARS since J and I made loads of critiques, complaints and were assured ‘this is a priority now’. We tried every ‘reasonable’ route and were ignored, shut down, harassed, and the level of emotional/intellectual violence was off the fucking chain.

Don’t tell us to be fucking ‘patient’.

2. the fact that they will only express it as ‘bicon has felt unwelcoming to bi BIPOC’ = an indicator of what anyone doing this work is in for.

It needs to say ‘bicon has been structrually racist and still is’.

They’re not even ready to have *that* conversation.

3. . I first went 17 years ago. Any ‘progress’ in that time has been forced by the blood, sweat and tears of BIPoC Bi’s.

“BiCon used to mean a lot to me.  For one weekend a year I felt like I wasn’t a minority in a minority. But the racism that kept on happening quickly wore down anything positive I felt.  In the end it wasn’t even the racism that made me decide to never attend BiCon again. One of organisers in 2016 made nonbinary ‘jokes’ as part of the night’s entertainment.  Several people complained, but he was still allowed to run the entertainment on the following night, when he proceeded to make child abuse ‘jokes’.  The number of survivors of childhood abuse at BiCon is sufficient enough to have a Survivors meeting most years. That one of the organisers thought it was a good idea to do this was mind boggling and deeply upsetting to me and many others who ended up in tears.  The next year this same person was stated to be on the organising committee.  There had been little in the way of apology or action taken to stop this person returning.  All my faith in BiCon was gone for good a that stage.”

An open letter to whiteandmiddle class BIcon* attendees.  *
Share wildly, and do not tag, but do credit me: Nila K
***
*and this means if you go regularly now. But it also means if you don’t go any more because you got to stay for long enough to develop your own community, network, friends, lovers. This is a thing that space is magically good at.
but only for the Right Sort.
As far as I’m aware none of us Bi+/Pan BIPoC have ever suggested you boycott the event.  I mean, speaking personally, a lot of that is how laughably unlikely it is that me suggesting this would lead to anything except more traumatising grief. The idea that those of you who get to access this space and build networks that sustain you during the year might consider stepping back = nonsensical.
But most of it with me and many others – is that we don’t want you to be more marginalised than you are. As fellow (but not peer) bi people, we know what it is to be shat on everywhere else.  Thing is, we know what it is to have that compounded by finding the one place that purports to support you… and to have that shit on you in its turn.
Coz, despite what multiple people have said about and to me: I didn’t ‘choose’ to stop coming.  I was forced out by virulent and violent classist racism.  It was a choice between my whole social, emotional, professional, activist world … and myself.  And thank fuck that I chose myself.  But no one should have to make that ‘choice’.
***
And yet we still don’t talk to you about this, and you still keep choose to support a horrifically exclusionary space and calling it community, family and (LOOL) radical.
So, think on that when you deal with us, eh?

It’s happening on Saturday 8th April 2017.  And good news for al Bisexual People of Colour – WE GET IN FOR FREE!

London Bi Fest is sometimes called a mini BiCon, but it’s a great even just as it is.  There will be workshops, music and fun.  The location has good accessiblility – look at the website for a breakdown of that.

Sessions have already gone up.  There will be a Bi’s of Colour session, where we’ll be giving progress on the upcoming book, plus catching up with all you lovely folks!

So please come along to London BiFest.  If you think you may difficulty of any kind getting to, or attending this event, please contact Bis of Colour at bis.of.colour.gmail.com and we’ll try to help.

BiCon is a weekend-long gathering for bisexual people, their friends, partners and others with a supportive interest in bisexuality. We don’t all use the labels “bi” or “bisexual” or even agree on what it means to be bi, but bisexuality is the common theme. A typical BiCon might have 250 participants, of which about 60 are at BiCon for the first time.

BiCon usually uses a university venue, not because it’s an academic event but because it’s cheap, welcoming and generally more accessible than other venues. You won’t find a flat screen TV in your bedroom, but you’ll be able to make your own meals (or order your own take-out!).

From a Bi of Colour: 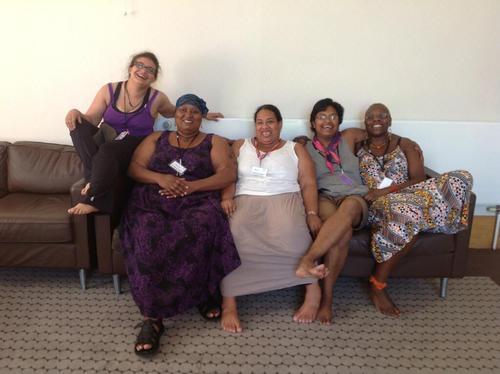 Bi’s of Colur had a great, supportive session at BiCon 2013.

We spoke about the positive changes in our lives as bisexuals of colour; of meeting increasing amounts of people who were just like us, and of not feeling like the only ones in the world. Black Pride was a particular highlight for many of us, with the accepting space being racism and biphobia free.

We were also grateful for the safer space to discuss and share things that had impacted on our lives.  Racism and Biphobia in the straight and LGBT communities is something that we all experienced, for example, being told we don’t look black enough to belong to our communities, or that we have to prove that we are really queer to gain entrance to a gay pub.  We are constantly questioned, asked to explain ourselves, but then not believed when we speak.  It is a frustrating and tiring thing to have to deal with. 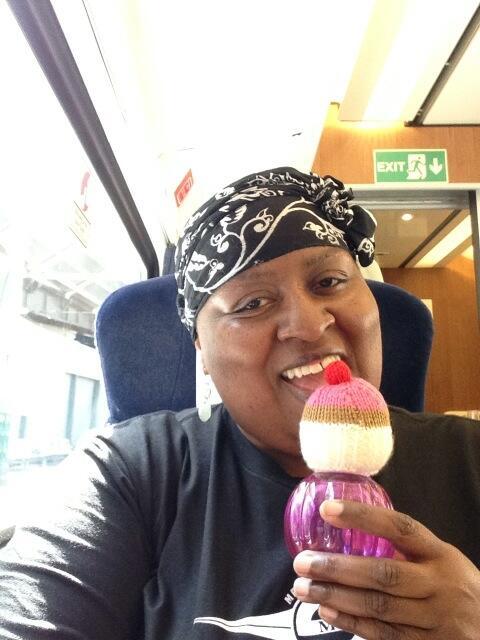 Three Bi’s of Colour are part of the trade union, UNISON.  We received an award for our support of bisexual workers. 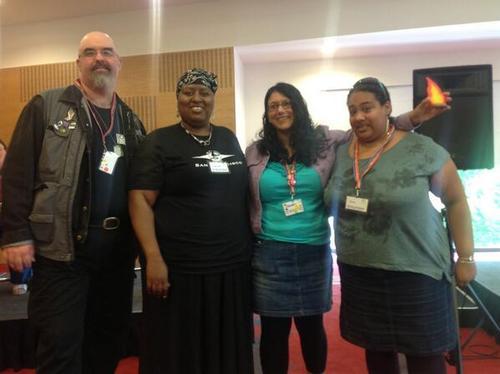